What is fetal intervention?

Fetal intervention is reaching inside the uterus to help a fetus who has a problem. Our ability to detect fetal problems has advanced so rapidly over the last few decades. While many diseases can now be accurately diagnosed before birth by genetic and imaging techniques, only a few require intervention before birth. These are generally simple anatomic problems that cause ongoing damage to the developing fetus and can be corrected using the techniques described below.

What are the techniques of fetal intervention?

There are three general approaches to fetal intervention, all of which have been developed in the last few decades. The most definitive and most invasive is open fetal surgery.

In open fetal surgery, the mother is anesthetized, an incision is made in the lower abdomen to expose the uterus, the uterus is opened using a special stapling device to prevent bleeding, the surgical repair of the fetus is completed, the uterus followed by the maternal abdominal wall are closed, and the mother awakened.

This is a major abdominal operation like a Cesarean section, except that at the end of the operation the mother is still pregnant.The anesthetic and surgical techniques were developed in the 1980s and have proven quite safe for mother and fetus. However, this is major surgery which requires hospitalization for 3 to 7 days, requires Cesarean delivery of this and future pregnancies, and often causes preterm labor and preterm delivery. The pregnancy must be supervised closely by an obstretric specialist for preterm labor and medications to control preterm labor are required until delivery. 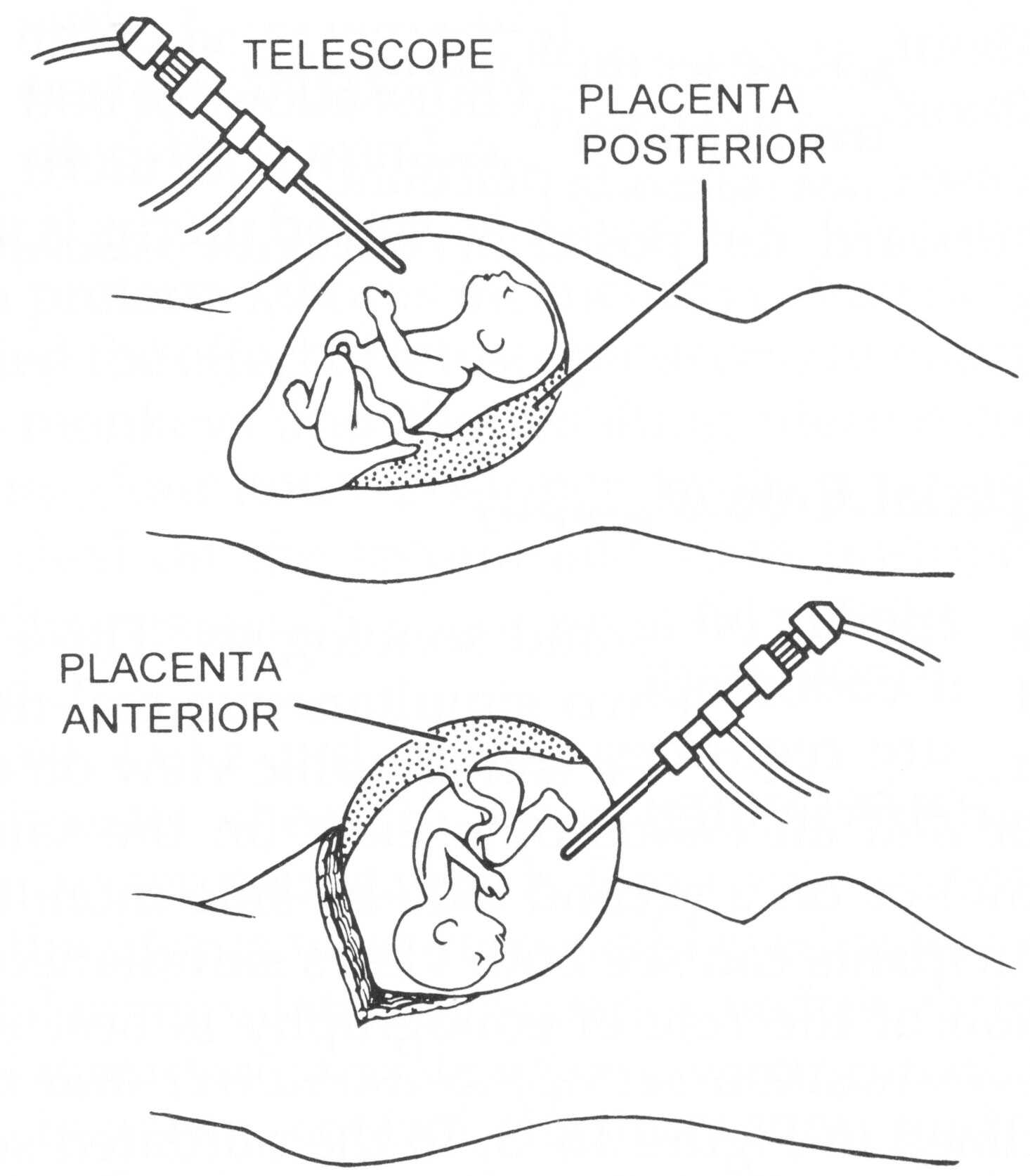 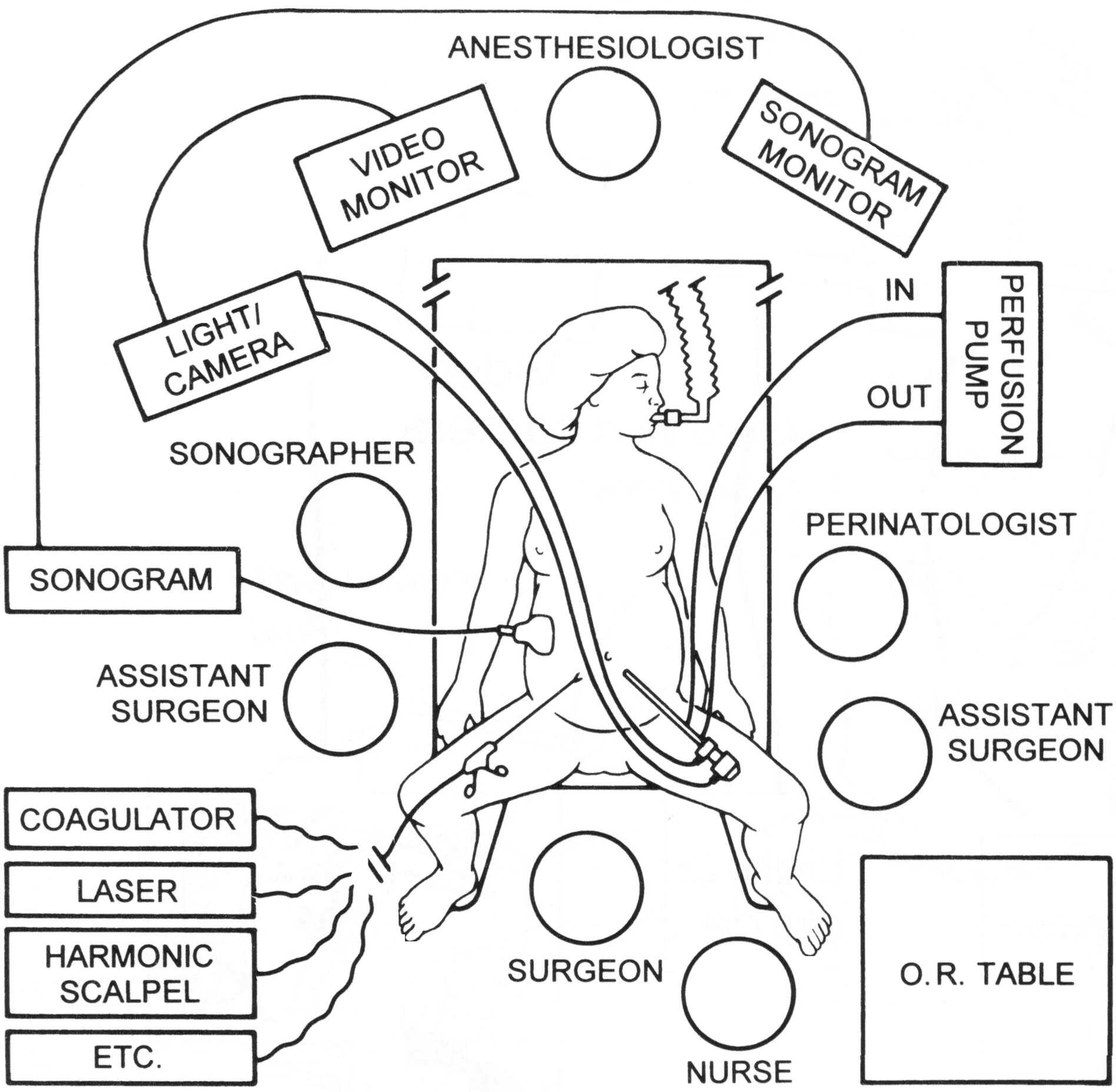 Fetendo was developed in the 1990s. It is the ability to see and intervene on the fetus through very small endoscopes. Surgical scopes have been refined to allow manipulation of the fetus with very small instruments guided by direct fetoscopic view on a television monitor.

We called it “Fetendo” because the actual manipulation is much like playing video games. As we developed these techniques, we discovered that the best method of seeing the fetus in real-time is to use both endoscopic (looking through the telescope), and sonograhic (looking at a cross-sectional image of the fetus by ultrasound) techniques on separate screens. The combination of image-guided manipulation and sonographically-guided manipulation has proved to be quite powerful in solving a number of fetal problems. Fetendo intervention can be done either through the mother’s skin (percutaneous) or, in some circumstances, requires a small opening in the mother’s abdomen (mini-laparotomy).

The advantage of Fetendo intervention is that it is less invasive than open fetal surgery. The mother's postoperative recovery is easier, and generally there is less preterm labor. Unfortunately, it has not eliminated the problem of preterm labor and, so, close pregnancy monitoring and medications to control preterm labor may still be necessary. Fetendo requires a skilled team of experts.

Fetendo has replaced open fetal surgery for some fetal problems but not all. It has proven particularly useful for treating problems with the placenta, like twin-twin transfusion syndrome, and for looking inside the fetus, for example, to place a balloon in the fetal trachea or relieve an obstruction of the fetal bladder.

FIGS-IT is a term we coined for "fetal image-guided surgery for intervention or therapy". It is the method of manipulating the fetus without either an incision in the uterus, or an endoscopic view inside the uterus. The manipulation is done entirely under real-time cross-sectional view provided by the sonogram. This is the same sonogram as is used throughout pregnancy to visualize the fetus, but in this case is used to guide instruments.

Like Fetendo, it can be done either through the mother’s skin or, in some cases, with a small incision in the mother’s abdomen.  It can often be performed while a mother is awake but sedated under a regional anesthesia like an epidural or a spinal, or even under local anesthesia. This is the least invasive of the fetal techniques and, thus, causes the least problems for the mother in terms of hospitalization and discomfort. Preterm labor is also minimized. Disappointingly it has not completely eliminated the problem of preterm labor, and so monitoring and preterm labor medications may still be necessary. Image-guided intervention was first used for amniocentesis and fetal blood sampling, but now can be used for a variety of fetal manipulations including placement of catheter-shunts in the bladder, abdomen, or chest, radiofrequency ablation to solve problems with anomalous twins, and even for some fetal cardiac defects. It is generally not useful for serious structural problems that require surgery.

It is easiest to think of fetal intervention in terms of invasiveness—open surgery being most invasive; FIGS-IT, least invasive; and Fetendo, in between. It is important to remember that the fetus can be treated non-invasively through the mother’s circulation. For some problems such as fetal cardiac arrhythmias, medicines and nutrients can be delivered to the fetus by giving them to the mother and letting them cross the placenta naturally.

The EXIT procedure is a type of intervention that occurs at the time of delivery. It is primarily used in cases where there is concern that the baby's airway is compromised and he/she will need assistance to breathe. This can occur in conditions such as CHAOS or with CDH Tracheal Occlusion Surgery.

The goal with the EXIT procedure is to provide the baby with a functioning airway so that oxygen can be delivered to the lungs after the baby is separated from the placenta. The EXIT procedure is a planned, specialized delivery involving both the mother and the baby. It should only be performed at a hospital that has a team consisting of a pediatric surgeon, obstetrician, anesthesiologist, and neonatologist.The start of the procedure is conducted like a Cesarean section. However, unlike a Cesarean, the mother is put under general anesthesia in order to ensure that the uterus is completely relaxed.

The head of baby is delivered and before the infant is separated from the placenta, the pediatric surgeon uses a bronchoscope through the baby’s mouth to look more closely at the airway. Depending on the type of blockage the surgeon may then attempt to pass an endotracheal tube (tube through the baby’s mouth into the trachea) and give breaths to the baby. If this is successful, and oxygen is being delivered to the baby through the tube, the infant is delivered and the umbilical cord cut. If a tube cannot be passed from the mouth through the obstruction, the pediatric surgeon will need to place a tracheostomy tube through the neck directly into the trachea, bypassing the blockage. The surgeon will make an incision in the neck of the baby and place a tube below the level of the airway blockage. Once the tube is placed, and the surgeon is confident that it is functioning and can be used to deliver oxygen to the baby, the infant is delivered. Care of the infant is then provided by the Intensive Care Nursery team.

What will happen after birth?

To provide a functioning airway so that your baby will receive adequate oxygen, he/she will likely be delivered via an EXIT procedure. After which, your baby will be brought to the Intensive Care Nursery for close observation and further assessment. Additional reconstructive surgeries on the airway may be needed.

What is the risk to the mother?

The most important consideration in all fetal intervention is the effect on the mother.  She is, in general, an innocent bystander who chooses to accept some risk to help her fetus. The risk to the mother varies with the type of fetal procedure. For open surgery, the risk is of general anesthesia and of the abdominal incision, but most important is the consequence of the incision in the uterus itself. The immediate consequence is preterm labor and the need for monitoring and medications to control preterm labor.  The longer term consequence is the incision in the uterus and the need for Cesarean delivery in this and all subsequent pregnancies. This is because the incision in the uterus during pregnancy is not the same that is used for elective Cesarean section at term.  The risk of Fetendo procedures is less because the procedure is less invasive. Anesthesia may be regional or local, and an incision in the mother’s abdomen may not be necessary. However, the risk of piercing the uterine muscle and, more importantly, the membranes lining the inside of the uterus remains a problem. There is still the risk of amniotic fluid leaking through the membranes and contributing to preterm labor. Unfortunately, this remains a significant risk and requires close monitoring for the remainder of the pregnancy.

The risk of fetal image guided surgery is less than either Fetendo or open fetal surgery. FIGS-IT can usually be done under local or regional anesthesia and usually without the incision in the maternal abdomen. However, the problem with entering the uterus, potential leakage of amniotic fluid, separation of membranes (sac around the fetus containing the amniotic fluid) and preterm labor persists. The problem of sealing the membranes remains one of the unsolved problems of fetal intervention.

What can I expect with fetal intervention?

For all fetal intervention, you will undergo careful evaluation and counseling by a multidisciplinary team of physicians, nurses, and social workers.  You will have all the options, risks, and benefits explained honestly and in detail. You will have adequate time to decide whether intervention is the right thing for you and your family. It will be your decision, and our medical team will support you through this process.

For open fetal surgery, you will be admitted to the Obstetrics Floor the night before surgery, and you can expect to stay 3 to 7 days in the hospital for recovery and for monitoring and management of preterm labor. The surgery is performed under general anesthesia and an epidural catheter is placed for 2 to 3 days of postoperative pain control. The most difficult part of the postoperative recovery is often the side effects of the medications used to manage preterm labor. While in the hospital you will have restricted activity, take medications for preterm labor, and have intermittent monitoring. You may be discharged from the hospital to a comfortable outpatient facility such as Ronald McDonald House or Koret Family House. Depending on the surgery and your condition, you may return home to deliver by Cesarean section at a local institution, or planned delivery at UCSF. The time between the intervention and delivery is a difficult time for many families in terms of family obligations, other children, work, etc. After delivery, the baby may be cared for in the intensive care nursery for days to months. This is dependent on the type of problem.

For Fetendo surgery, you will be admitted the night before or perhaps the day of surgery. The procedure is performed in the operating room under regional or, occasionally, general anesthesia. You will recover for 1 to 3 days on the Obstetrics Service while the uterus and fetus are carefully monitored. Medications to treat preterm labor are sometimes necessary for a short time, and outpatient follow-up sonograms will be necessary for the rest of the pregnancy. In many cases, the family can return home for planned delivery at a local institution or may choose to return to UCSF for delivery and postnatal management. Cesarean section is usually not necessary.

With fetal image guided surgery, you may be admitted to the hospital for the procedure, or it may be done as an outpatient procedure. In most cases, you may be monitored overnight for preterm labor. Medications to control preterm labor may or may not be necessary. The remainder of the pregnancy will be monitored by sonogram, and delivery may be planned for a local institution or at UCSF.

Next generation sequencing (NGS) is one area of precision medicine the holds promise for the diagnosis and treatment of fetal congenital anomalies, genetic disorders and other complications of pregnancy.