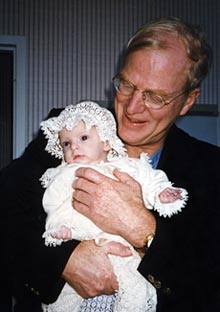 Dr. Michael Harrison served as division chief in Pediatric Surgery at the Children’s Hospital at the University of San Francisco for over 20 years, where he established the first Fetal Treatment Center in the U.S.

Laying the Foundation for Fetal Treatment

In January 1978, Dr. Harrison accepted a faculty position at UCSF because it offered what he believed was the best opportunity to explore an idea he nurtured since internship—that is, the possibility of fixing certain fetal anatomic defects before birth to avoid the devastating and sometimes irreversible consequences he encountered in newborns. During the 1980s and 1990s, he and his research colleagues developed and refined many of the techniques that have made fetal surgery the fast-evolving and major contribution it is within the surgical profession and within fetal therapy itself. Clinically, Dr. Harrison worked closely with obstetricians, anesthesiologists, geneticists, sonographers, surgical sub-specialists, neonatologists, nurses, and ethicists to lay the foundation for what would be the multidisciplinary UCSF Fetal Treatment Center, the first fetal treatment center in the United States now entering its fourth decade. These efforts took the enterprise from laboratory to the first NIH-sponsored fetal surgery clinical trials to test the safety and feasibility of procedures for anomalies such as congenital diaphragmatic hernia, twin-twin transfusion syndrome, and fetal myelomeningocele. 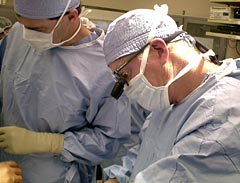 Dr. Harrison has remained active in clinical practice and is a member of many prominent surgical organizations: he has served as Chair of the American Pediatric Surgical Association’s Committee on Fetal Therapy, and he is a founder and past-president of the International Fetal Medicine and Surgery Society. In addition, he has served on a number of editorial boards, including those of the Journal of Pediatric Surgery and Fetal Diagnosis and Therapy. He has published nearly 400 peer-reviewed articles on a multitude of pediatric surgery and fetal surgery topics, and remains a highly requested lecturer and guest speaker for numerous surgical and medical societies around the world.

In 1984, he published the first comprehensive textbook on fetal therapy, The Unborn Patient: Prenatal Diagnosis and Treatment, which is now in its third edition. Dr. Harrison’s expertise in pediatric and fetal surgery has international renown. He has been recognized by colleagues for his contributions to the field and honored with a number of awards. Most recently, Dr. Harrison received the prestigious American College of Surgeons Jacobson Innovation Award in honor of his work in creating the specialty of fetal surgery.

Considered to be a surgeon ahead of his time, Dr. Harrison’s experimental work in animal models and clinical work on human fetuses and newborns made him the pioneer and recognized founder of fetal surgery as a specialty field in the United States and abroad, and his accomplishments remain the guiding force for the future of fetal medicine. He is widely regarded as the “Father of Fetal Surgery.”